We made jam today. Well, Erika made jam and I looked on in amazement and did the heavy lifting when necessary. Is there anything easier than jam? I had no idea it was so simple. 5 kilos of strawberries, cleaned and put in a large pot with lashings of sugar. Left overnight to release vast amounts of juice (and they did release an amazing amount of juice. Juice which when I illegally tasted it was the most delicious heavenly nectar on god’s green earth, or something. Why does no-one package this stuff in tetra bricks and flog it?). Then this morning, we removed the strawberries from their own juice and slowly simmered it until reduced to half its original volume. Chuck the strawberries back in, cook for an hour-ish and then transfer to jars. Close tightly and store on the floor of the living room near my feet in some kind of blanket arrangement so that they cool as slowly as possible (which apparently makes the jam set free of any setting agent). No idea if it will work, but frankly who cares, whether it sets or not it’s bloody gorgeous. We are still eating the jam Erika made last year at this time, and it’s quite possibly the best jam I’ve ever tasted. Only rivalled by my mother’s bramble jelly.

In other news, despite my bitterness at the Orthodox nun who we saw fare-dodging a few weeks ago, I sincerely hope this article is not about her. I think "I don't understand why journalists are making such a fuss about this" would have to go down as quite possibly the most macabre and sick quote I've ever heard. Good to know that such enlightened practices are still going on in my home country. I'm close to speechlessness.

A completely gratuitious picture of Erika and Bogi from just over a week ago. 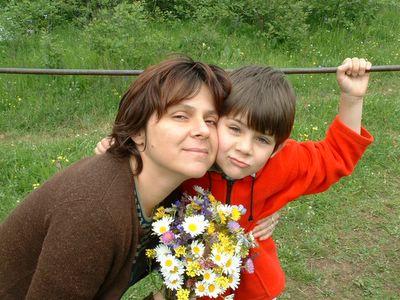