The Sodden Road to Samarkand

We had one day off in Uzbekistan, so my colleague George and I decided to go to Samarkand. It is obviously one of the things that nearly everyone who goes to Uzbekistan as a tourist goes to see, and I’d heard enough about it to really want to go (though when you get to Uzbekistan, everyone tells you that Khiva and Bukhara are even more beautiful – but we didn’t have the time to get to either of those).

We took the early morning train from Tashkent, which in itself was an experience. In our first class compartment (which only had us in it) was a tea set all laid out. We had a kind of train-stewardess who came round from time to time to check that we were OK but as we didn’t have any common language it was difficult to have any meaningful conversation and it wasn’t really possible to actually make use of her services (and to be honest we didn’t really work out until the end of the return journey that what she was asking us were questions about our well-being and needs). She did come by and turn the TVs on in the carriage though so we could be assailed by pop music and subsequently the execrable post-Bean “Johnny English” film badly dubbed into Russian. After we’d booked the train, one or two people had told us that we should have gone by taxi since the road went through the mountains and was beautiful whereas the railway line didn’t and wasn’t. We still thought it would be a fascinating landscape, since it would be our first glimpse of Uzbekistan beyond Tashkent. We were wrong and they were right. Flat featureless and scrubby would be the best way of describing it. Someone in Tashkent had struggled to come up with an adjective and had settled on “grey”. It was apt.

Sadly, this one day off happened to be the only one during our stay which featured bad weather, and as we got closer to Samarkand, the already grotty conditions deteriorated, until it was just grey, pouring with rain, and utterly miserable. And bitterly cold, as we found out when we stepped out of the warm train onto the platform. We were met by Dilya, our guide, a very nice Tatar woman, who proceeded to take us round the sites. Unfortunately while she was all wrapped up warm and had an umbrella we (and in particular I) were ill prepared for this English weather, and were not really enthused about standing around in the cold and wet, while we learned about the history of Samarkand. I had to keep asking her if we could go and stand out of the rain as she told us about the mausoleum of Tamurlane or the Registan. It’s difficult to fully enjoy and appreciate the majesty of some of these buildings, when you’re freezing your arse off and getting soaked. At one point George, who is diabetic, needed to urgently raise his blood sugar level, so we asked Dilya if there was a café nearby. There was in one of the madrassahs of the Registan, and this small cozy warm place was possibly my best memory of what is probably, seen in better conditions, one of the wonders of the world. While the Registan is possibly the most famous place in Samarkand, my favourite place (and not just because the rain had eased off by this time) was the Shah-i-Zinda cemetery. A stunningly beautiful place.

We had been disappointed originally that we would only get to spend the day in Samarkand and not be able to see it at more leisure, but in the end, we were quite glad to get back to the station at the end of the day, and reboard the same train that had brought us there – with the same staff. This time though, we had company in the compartment. Three women (and subsequently one bloke who we think was probably drafted in to act as so kind of impromptu chaperone for the women). The young one, Nargiza, spoke fairly good English and we learned that she was travelling to Tashkent with her mother-in-law and aunt (the other two) to visit her husband. It was quite a weird conversation as she was obviously friendly and eager to practice her English, but was (despite her marital status) extremely young (at least to old men like us), and the conversation had to bear up under the strain of two strong cultural differences – the first, the Uzbek/British one, being actually interesting and worth investigating, and the second, the teenage girl/middle-aged men one, being somewhat more insurmountable. Her mother-in-law seemed like a right battleaxe, and re-reading “Murder in Samarkand” I was reminded of these two when Murray describes the life of virtual slavery that young girls enter into for their in-laws when they marry in Uzbekistan. Many young married women in Samarkand attempt suicide every year, by the method of dousing themselves in flaming cooking oil. It is an intensely sobering thought.

This time round we were served a diet of Uzbek movies on the TV, all of which seemed to have the theme of puppy love and people pining for the traditional life of the countryside. The love stories also were all based around the city boy/country girl (or vice versa) intrigue. They weren’t exactly too difficult to follow despite the language issue.

When we arrived, Nargiza and family invited us to her husband’s house to have a tea, in typically hospitable Uzbekistan style, but we declined citing another appointment. It was very nice to be invited, but we felt we had gone about as far as the conversation could possibly have gone in the 4 hour train journey, and extending it didn’t seem like something that would be greatly enjoyable for either party, really.

Here are some pics of Samarkand, in the grey and wet weather. 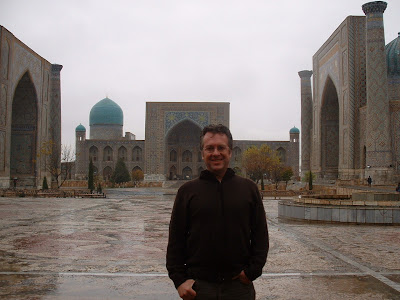 Your correspondent, looking bedraggled and freezing in the Registan 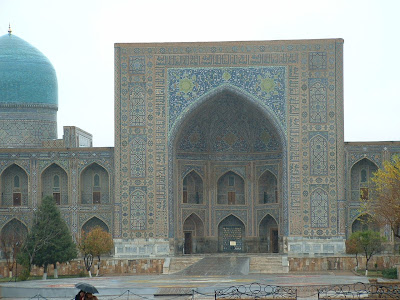 One of the Madrassahs in the Registan. For an idea of scale look at the two women huddled under an umbrella in the foreground. (For more info about the Registan, check out the wiki page) 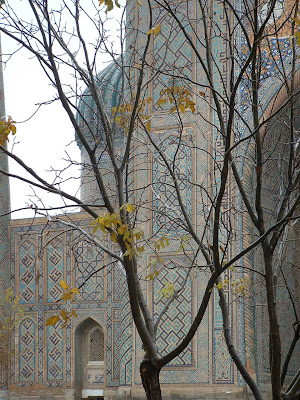 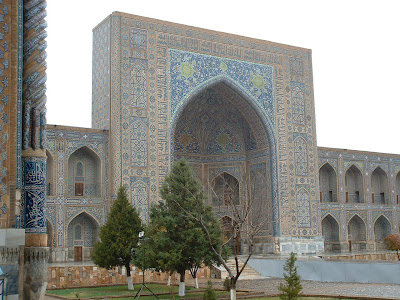 Yet more Registan pictures. I had by now managed to find a place sheltered from the rain to take these shots. Note all the tile work on the big building ahead and the pillar in the foreground. Much of this is not original, sadly, but reconstructed during Soviet times after a big earthquake in 1966. However the reconstruction was, as far as I can tell, extremely faithful to the original, and they did a fantastic job of it. It must have cost a fortune. 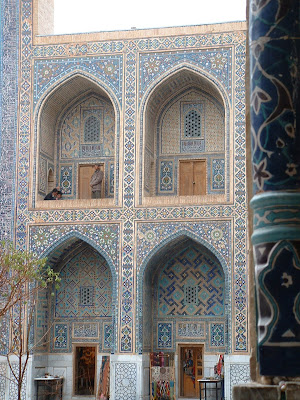 Inside one of the madrassahs (behind one of those massive facades that face on to the square. The doorway on the lower right led to the wonderful cozy cafe that nourished my need for temporary warmth and dryness. 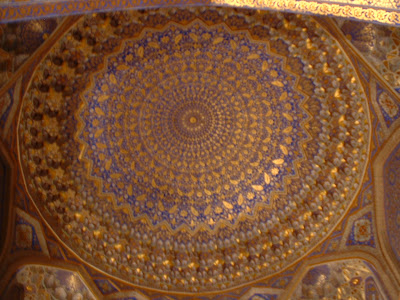 The ceiling inside one of the buildings of the Registan. It's not really a full on dome, they just decorated it to make it look that way. There were something like 15 kgs of gold used in the reconstruction work. Apologies for slight fuzziness, I needed to turn off the flash to get a good shot 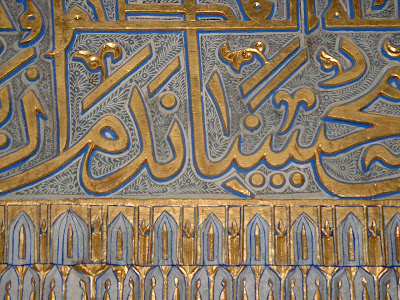 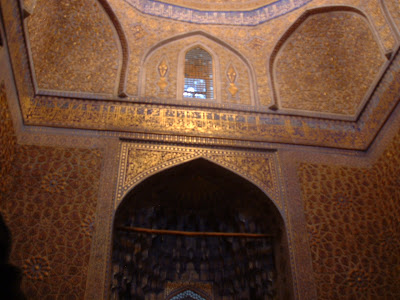 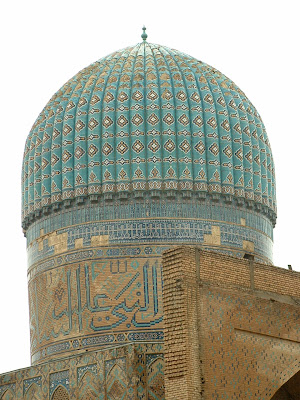 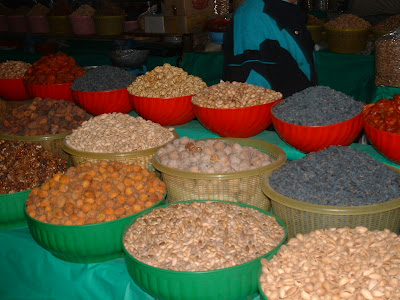 Samarkand bazaar. Dried fruits and nuts are the big thing in Uzbekistan. You might almost say they are Uzbekistan's raisin d'etre. (Sorry. Couldn't help myself) 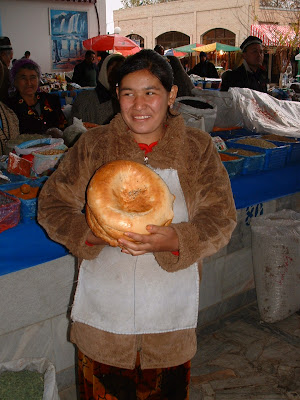 Girl and bread. This round bread is very typical of Uzbekistan. The ritual around breaking it is quite formalised. 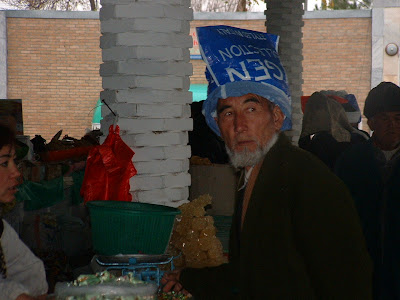 What the fashionable man about Samarkand is wearing this season. 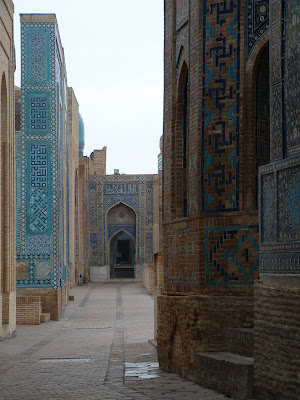 Really enjoyed this post, and especially the photos, which shine through the less than perfect weather.

You get to go more interesting places for work than I do (I spend much too much time in the lower-rated airports in your post a while back).

I was born in Samarkand. I was too visiting Samarkand with during my two weeks holiday in the beginning of December last year. Great post and great photos. I am sitting and enjoying all what you wrote from Brighton now.