Blog of a Death Foretold

So, yesterday we went to Gyergyószárhegy, which is a village about an hour north of here to witness the funeral of the Farsang. [Szárhegy, as it is known, is one of those villages that really need you to be careful with your accents - write it as Szarhegy and it becomes "Shit Mountain"]. As you will be aware if you have been reading for a while, Farsang is the Jan 6th - Lent period in which much merriment is to be had (normally because it is too cold to do much but get drunk and have lots of sex as far as I can surmise). While some countries celebrate carnaval by having a four day bacchanalia, others have a single day of general mayhem, and still others (the UK) celebrate in a typically reserved way by making pancakes, here in the villages of Transylvania the period goes on for 6 weeks or more (depending on when Easter is).

But all good things must come to an end, and so it is that farsang (or actually some kind of athropomorphised farsang dummy) is laid to rest in a funeral ceremony on the weekend before Lent kicks off (ie this one). Villagers from all over the county convene on one spot - which changes annually- to perform their mock funeral ceremony, drink palinka (I assume - it certainly seemed like a well lubricated event) and consume large quantities of töltött káposzta (stuffed cabbage). It was all very enjoyable and I thought I would share with you some pictures (all of which can be blown up to a more viewable size by simply clicking on them).
~~~
Dancing round the funeral pyre - in the background you can see the castle for which Szárhegy is famous. 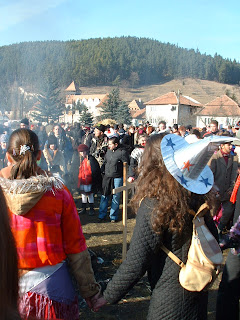 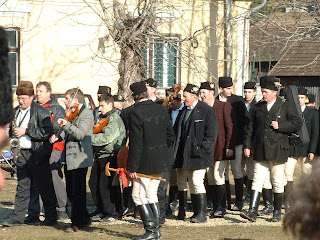 On-stage funeral. The big bale of straw you can see is actually a bloke dressed as a bale of straw. It was dancing and stuff. 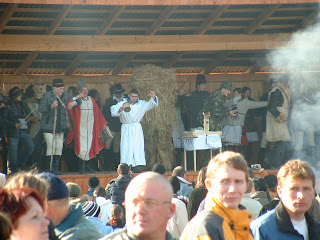 The body of the Farsang is brought to face it's final rites. Sadly you can't see from this picture the fact that it had a carrot and two onions attached to it in a particularly suggestive place. 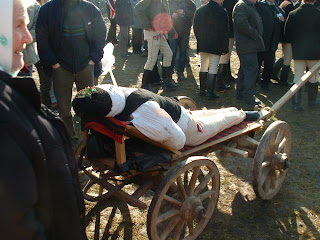 This is a bull apparently. To me it looked more like a beehive with a pot on its head, but I was assured that it was a bull. 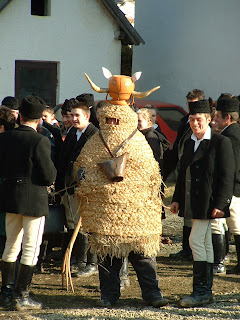 A man is beaten to death for wearing a sheep's skull on top of his head. And rightly so. 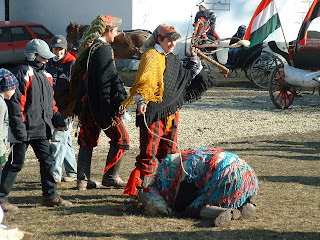 The farsang is dead. Until next year, when he will rise, phoenix-like from the ashes. 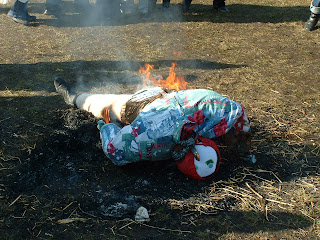 Over the course of the last 20 years I have done a lot of flying - so much in fact that if I were to retire to a hut in the forest and eat fallen leaves for the rest of my life, I'm sure my lifetime carbon footprint would still be a massive yeti-sized one. I mean obviously in comparison to people who work for multinational companies, I haven't done that much flying, but I do seem to have spent an inordinate amount of time on aeroplanes.

Twice in that period, I have found myself in business class - once when a mate was giving me and my then-partner a lift to Porto airport for our flight to the UK, and he was so late picking us up and getting us to the airport that we were forcibly bumped up as they were the only seats left. Which left my irritation at his somewhat irresponsible approach to timekeeping thrown back in my face in the best way; and the second time when I flew to a conference with my then boss and he bumped me up with his frequent flyer points for the Hartford to Chicago leg. Neither of these flights were particularly long, so I didn't get much benefit from the excitement of being in the front seats (and when flying domestically on a US airline, the business class experience is more or less the same as economy class anywhere else).

But now, thanks to getting a gig working on a contract with a seemingly unlimited budget for travel, I am going to outstrip those experiences very rapidly. In fact all of my upcoming flights will (I think) be on business class, so I will soon be able to go as far as to make comparisons with each airlines posh services. My trip to Nepal on Monday (and subsequent return), for example, will see me fly on 5 entirely different airlines - and so I will, among other things, be in a position to rank the Tarom business class experience to that of Singapore airlines (not a comparison that I expect will be especially kind to Tarom, but I remain open to the possibility of a surprise). Who knows - I may be able to blog directly from my seat, such are the hidden and untold riches of such travel.
Posted by Andy at 9:53 am 7 comments:

Been somewhat swamped of late since this week I have not one but TWO book deadlines. (Meaning I'm writing them, not reading them).

Lest you start to wonder whether I am in fact some widely published author, aside from one manual I wrote for a training company some years ago, these are actually my first and my second book. So, you won't find my name on Amazon. Yet, anyway.

So, I'll go back to my bunker mentality for now and attempt to find the time later to asnwer the tag I got regarding 5 dishes and my random thoughts on my short Bucharest trip.
Posted by Andy at 2:01 pm 1 comment:

Sometimes I wonder whether Romania is really the best place to bring up my children. Hot on the heels of news of some respiratory infection that may or may not be flu or pneumonia, which is sweeping the nation, and the revelation of a European survey (mentioned here) which says that Romania is basically the unhealthiest country in Europe, comes news that one of Bogi's classmates has been quarantined at the hospital with scarlet fever. Scarlet fever? I thought that had gone the way of smallpox and was now something you only read about in Victorian novels. Not so in Romania, it seems, where scarlet fever is apparently alive and well. I suppose it fits in with the horsecarts and the villagers heading off to the fields armed with scythes, but blimey.

(You'll be happy to know that it is cured quite easily with penicillin, just in case)
Posted by Andy at 11:28 am 1 comment: