What can you learn from a single line on a menu?  Well, at times, quite a lot... 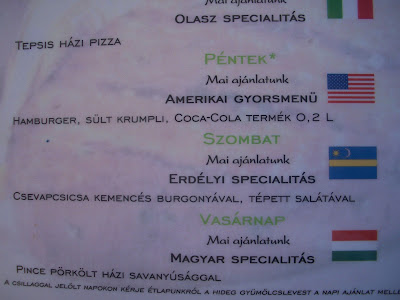 The picture is the specials at the "grill" by the swimming pool at a hotel in Hungary.  Each day a different location is represented (though actually the US managed to get on twice in the 7 available days).  On Saturday (Szombat) as you will see the region of choice is Transylvania (Erdely)  Now the first thing to notice is that to represent Transylvania they've chosen the Szekely flag, which  neither sums up Transylvania as a whole, nor even the Hungarian element of the Transylvanian population, but never mind, let's move on.

The first item on the menu is "Csevapcsicsa", which anyone who has ever been to anywhere in the former Yugoslavia will recognise as a Hungarianised spelling of a word from Serbian/Croatian/etc.  Ćevapčići, are small turds (frankly the most descriptive word) of minced meat with herbs and stuff which are barbecued or otherwise grilled.

Now it is very true that in Romania a version of Ćevapčići are indeed eaten.  They are called mititei or more commonly, mici. You see them absolutely everywhere, at every outdoor event.  Occasionally on a Hungarian language menu or board you might see "mici" written as "miccs" to phonetically render this Romanian word in Hungarian.

So what we glean from this word is that (a) mici are being sold as a Transylvanian speciality.  From a Hungarian perspective this may not be far removed from the truth, I suppose, since the average Hungarian traveller, brave enough to enter Romania at all, is never likely to venture south of Brasov; (b) they are implicitly (with the flag and all that) being sold as a Szekely food.  Even the most hardened psychotic Szekely nationalist would not think of suggesting that mici were anything other than Romanian;  (c) it is assumed that a Hungarian clientele would not recognise the word miccs (or mici), and so they are offered the serbian/croatian word instead.  This is probably because most Hungarians seem to have been on holiday to Croatia at some time or other, but have probably not dared venture into the wilds of Erdely.

Onwards. These mici are being served with kemences burgonya, or ( I presume) roast potatoes. Literally "oven potatoes", anyway.  Could be jacket, I suppose. Anyway, the only time I've ever eaten either roast or jacket potatoes in 9 years living in Transylvania have been the times when I've cooked them. So, again, not an especially local speciality.  Mici, as everyone from here knows, are served with a massive glob of mustard and some bread.  If potatoes are involved at all, it would be as chips.

The final part of this very Transylvanian dish is tepett salata. That translates literally as "torn salad". No, I don't know either.  I have two possible theories here - one is that in the quest for your authentically rustic, peasant, and hence Transylvanian, experience, they have elected to make a salad that involves the lettuce being torn, authentically and rustically.  The other is that in Hungary they believe that the poor Transylvanians, can't actually afford knives.

This restaurant wasn't actually that far from the border either. Still, I guess this happens all the time, and Hungarians would likely point to the weird things called "goulash" on menus worldwide, or what passes for "chicken paprikash", in similar establishments as being proof that no-one is immune from this sort of thing.

This has been today's textual analysis lesson.
Posted by Andy at 8:50 am 1 comment: