To the Manor Osborne

I know someone who, because of depression, hasn't been able to work for years. Some days he is OK, some days not. There is no way he can hold down a normal job, because there are days he just can't get out of bed. He lives in London and can barely scrape by on the welfare payments he is able to claim. He can't afford to go out with friends or do anything that most of us take for granted. Now Gideon "George" Osborne and the government of old Etonians and assorted other people who have no idea what life is actually like for poor people, have decided that he should lose his right to incapacity benefit (unless he can manage to be classified as "seriously disabled", which sounds like a physical definition rather than a mental one). His story is not in any way unique. In crafting a budget which they claim to be "fair" and "progressive" they have in fact attacked the poor of Britain in a way that even Thatcher might have balked at.
Benefit fraud costs the UK taxpayer something like £1bn a year. Tax evasion is thought to cost in the region of £40-70bn a year. Which one is the government targeting?
I'm sickened by these scum. I urge everyone to read this fantastic and savage piece by Johann Hari in today's Independent. It says everything better than I ever could. This is war on the poor, pure and simple.
Posted by Andy at 10:27 am 5 comments: 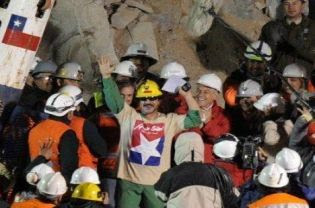 Like most of the planet, I assume, I spend much of the last 24 hours or so gripped by the scenes from Chile, and moved very deeply by the whole event. Watching every miner appear, hug their families and some of the rescuers and be cheered by the crowds of people, never failed to get to me, even after I'd watched practically the same scene several times. How those miners survived, particularly in the first 17 days when they were sort of presumed dead and they were completely alone living on a spoon of tuna and a drop of milk a day, is amazing. The rescue effort, too, was astounding and incredibly admirable. And even the personal, hands-on involvement of the Chilean government was impressive (I have no time for Mr Piñera's politics, but he and his mining minister and everyone else involved have definitely done fantastically well here).
All in all, I have been moved to tears, riveted and totally impressed with everything that has happened on that mountain. Who knew that watching a wheel turn very slowly pulling a cable upwards for 20 minutes at a time could be such gripping TV?
However, it has brought home to me that by the standards of much of the world's population I am weird. Because two themes that have been rammed home again and again by the miners, by the rescue team and by everyone else strike no kind of chord with me at all.
The first is religion. Now I get that the majority of the population of the planet believe that all the stuff that happens is somehow controlled or ordained or just watched over by some kind of unearthly power. I even understand some of the reasons why people might feel this way and want some kind of non-worldly force to cling to at times. But (and again I know here that I'm in the minority) I just cannot understand the repeated thanking of God on emergence from that hole in the ground. Partly because it seems actually disrespectful of the incredible rescue effort - God didn't get you out of there, I want to shout, these amazing engineers and workers and safety experts and drillers and paramedics and psychologists and designers and everyone else involved got you out of there. Hard work, creativity, perseverance and human endeavour got you out. Those people who you are hugging and who are clapping your rescue - it was them. Not some mysterious otherwordly force. And, while we're at it, you did it too. Your survival is primarily down to you, and your fellow trapped miners. Your resilience and strength and bloody mindedness got you through this.
The other reason why I don't really get it is that if God got them out, in the face of all the evidence of the human rescue effort, then surely that means God trapped them there in the first place. I know logic doesn't really enter into faith much, but ... (and here I shake my hands around the keyboard and take on a facial expression of total speechless bafflement). It really does surprise me every time.
The second big theme that emerged (and you can see this on that picture up there, that the miner pictured is wearing a T-shirt, which, along with its obligatory "Gracias Señor" slogan also makes clear reference to the Chilean flag) is that of national identity. Now this one is likely to be even more controversial than the religion one, since at least there is a sort of ongoing conversation about religion and belief, and everyone knows that there are differences of opinion, but what is national identity? I don't get it. Really, I know to most people it's like the air you breath - there, necessary and entirely self explanatory - but I've never understood it. [I should point out that if the miners were going to thank Chile or God, I'd rather they thanked Chile, because at least I can see that people and expertise and equipment from Chile along with the Chilean state itself, did get them out]. But what does it mean to be Chilean? What does it mean to be English, or Hungarian, or Romanian? I still don't really know. I ask people here, and here in Csikszereda, national identity is a really big deal, and as I ask them I get a few reactions. First there is complete bafflement that I've asked that question. This is often followed by a sort of "Well it's self-explanatory, surely?" type response. And when I say that no, it really isn't, I get a lot of confused half answers (this is not really anyone's fault, because they haven't thought about it before, and it's a difficult question to answer). Eventually, people sort of resign themselves to "well it must be about language" - mostly because when it comes down to it language is really the only major thing the differentiates Hungarian Transylvanians from Romanian Transylvanians. But in Chile's case it can't be language. They don't speak Chilean, and in fact they speak the same language as pretty much all the countries around them.
As I say, it baffles me. I mean I know all the arguments about identity and belonging and I've read "Imagined Communities" and all that. But I still can't really "get" national identity, on a personal deep empathetic level. I understand it intellectually, sort of, but not really on a deeper level.
And so I watch miners coming from out of (a real earthly) hell, and thanking God and singing the national anthem and I am left utterly moved by the human aspect. the relief, the families, the love, the sense of community of rescuers and rescuees, the joy and the happiness, and yet utterly unmoved by the religious/national aspect.
And, I do know that this makes me weird, and not them.
Posted by Andy at 10:19 am 2 comments:

Norman Wisdom has died. One of the people who has actually made it into the blog before: http://szekely.blogspot.com/2006/02/wisdom-of-ages.html There's probably some "Mr Grimsdale" type line that I could use here to conclude that otherwise meaningless comment into something with gentle pathos, but so unfamiliar am I with Mr Wisdom's oeuvre that it's beyond me frankly
Frost last night. Bollocks. It's too soon for winter for me.
This blog post can safely be ignored.
Posted by Andy at 9:30 am 3 comments: