Emigration - the flip side of the coin

It's been a week of bile and attempted humour about immigration.  Specifically Romanians and Bulgarians coming to Britain  They are apparently lined up in their hundreds of thousands, possibly millions, suitcases packed, just ready for the moment when Britain is forced to open its borders by the dastardly EU.  On that fateful day (which is still a year off, so I guess the stories are only going to ramp up as the year goes on), they will flood* over the channel, a tsunami* of people, desperate to bask in the eternal sunshine of England. 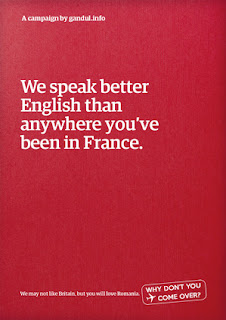 News was extensive (both in the UK and here) about the government's ideas to try and reverse advertise the country to discourage this tide* of Balkanites.  In retaliation a newssite here, Gandul, slightly missing the point, issued a series of mock ads trying to persuade Brits to come to Romania instead. Most of these were shit, focussing on  how Romanian women were as hot as Kate Middleton (managing to be both sexist and obsessed with royalty at the same time, not exactly my cup of tea) or the fact that the dickheads off of Top Gear liked the Transfagaras highway.  There was one good one, which is repeated here.

(* It's apparently de rigeur to refer to the movement of people with water based metaphors.  So I shall be continuing to do so as often as possible).

Anyway, while the articles in the UK press themselves were bad enough, I was foolish enough to venture "below the line" on occasion and see the real bile and vileness emanating from the keyboards of some of Britain's self-appointed guardians of Englishness and bigotry.  Even in the Guardian the comments were for the most part pretty vile stuff.

But I thought it might be worth putting this in a little bit of context. The media in the UK bangs on and on about immigration (and obviously it is a topic that affects people, so there is a good reason for it being on the agenda. Though, having said that, immigration is something that primarily affects the working class communities in which immigrants invariably end up, and not the lives of people in the media, who instead are content to stand on the sidelines and whip up anger and fury, without presenting the whole story).

But what of the immigrants themselves?  Where's their side of the story?  What of the effects on places like Romania?  This is something we rarely see, because , I presume, those in the media simply don't care to discuss the humanity or choices being made by those emigrating.

Talk to people in this country and ask them if they know anyone who has emigrated, and everybody, without exception, will tell you of close friends or family members living somewhere else.  They will tell you with a kind of pained, sad, wistful expression on their faces. For a country in which relationships - both for family and friends - are so key, the break-up of the individuals, of families, of friendships is a social pain at the deepest level. The vast majority of people do not want to leave, and yet, according to the most recent census, the population of Romania has shrunk by something close to 2.5million in the last ten years, or well over 10%.  There are more than 750,000 Romanians in both Spain and Italy.

So why? Why do people leave?  The UK media presents everybody as some kind of freeloaders desperate to come to Britain and live high on the hog, ignoring the fact that those who do end up coming work in low paid service jobs, and stay in cramped conditions in an attempt to send at least a little money home. The majority of those in Spain or Italy work as agricultural labourers, or in construction , or caring for old people.  They are not exactly living it up.

But here, here there is nothing that even compares to an agricultural labourer's job in many cases.

Two anecdotes concerning friends from here who've left, which hopefully will illustrate a little of this desperation.

Sandor had his own business, repairing and offering technical support for computers. He and his partner built it up from nothing and were doing relatively well.  Come the crisis and his clients - companies themselves - started going under, or not paying their bills. They tried and tried to keep the company alive against the odds, but eventually they could do so no longer.  There was no other work.  Nothing could support him and his family of 5 to get by here.  They tried everything they could think of. Eventually, desperate, he decided to emigrate to Holland (where his sister already lived) to try and find work.  When he told people he was leaving he cried.  Every time. Not one member of that family wanted to leave Romania, not one of them wanted to go, but in the end they reached the conclusion that they had no choice. It took him a long time, but eventually he found work, and his family were able to join him. I'm happy for them, but they would rather be here.

Robert works in construction.  He too had his own business, doing projects for people.  He in fact was the person who rebuilt our house.  After a year with almost no work, desperately trying to keep his family of 4 afloat he was offered some construction work in Iraqi Kurdistan.  A number of people from the area were recruited by a local businessman, and they travelled together by bus all the way across Turkey and into Iraq. They were there to build a hotel, but it quickly became apparent that they were being screwed over - after 3 months with no pay and working long hours, he finally accepted that there was no money ever going to come and so he quit and came home.  He still has little to no work.

These are just two stories, of individuals and families and dislocation. But there are also bigger stories, of communities and the fabric of society.

The Romania that is left behind

There have been documentaries on Romanian TV about villages in which there is no-one between the ages of 16 and 40.  All the young adult population is living overseas. The kids who have not gone with their parents, live with their grandparents.  The parents, to make up for their absence, give their kids presents of computers and games and so on.  You have whole villages where there is a visible actual generation gap (as a whole generation has gone), while the kids surf the net and their grandparents have no idea what is going on.  As yet we have no idea what the social effect of this will be. But it doesn't seem like it will be good.

Go to any hospital here, and you will see posters all over the place targeting the nurses, inviting them to come and work in Spain or Italy or Canada or wherever.  They work incredibly hard and in some cases probably make something like 300 Euros a month.  The attraction of going to work somewhere you might make 5 times that to start out with is undeniable. The fact that the majority stay here tells you a lot about the pull of home and the family.

Last year the Romanian president made a speech in which he thanked the emigrants for their contribution to the economy of the country.  They are away, not being a burden on the state, and sending home what little money they make.  In short-termist micro economic terms he's right. They are helping the country.  (This speech did not go down to well with the governments of Spain and Italy as you might imagine).  But what is the ultimate cost?  What happens in the future when Romania's best and brightest have left, when whole villages become uninhabited?

If Western Europe does not want the free movement of labour enshrined in the EU to mean immigration it needs to stop emigration.  And it can do that by being a genuine community, a  genuine union, in which the strong support the weak, the rich help the poor.  Their governments (and media) need to stop bitching about paying for things and supporting the poorer nations.  But of course that might mean that fewer people come, fewer people prepared to work as agricultural labourers or toilet cleaners or home help or low paid construction workers.

It seems like the bulk of the attention has blown over and I can now go back to the normal barren desert of this blog, occasionally frequented by tumbleweed. 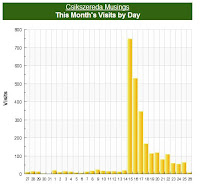 
So, for any readers of this blog who want to review some of the things that were published, here they are
There are a few other articles in the local Hungarian press which I either can't find online or can't be bothered to now.

Anyway, I have more to say, but it'll have to wait.  I'm going off to do stuff in the snow for the weekend
Posted by Andy at 3:49 pm 2 comments:

OK.  This has got a bit out of control. I have now made Adevarul's front page and I am getting contacted by journalists, people thanking me or otherwise being very nice, and others who are sending what can only be described as hate mail.

I'm going to turn on comment moderation on this blog and I'm going to step back a bit - if I have sparked this story and begun a debate on something I believe to be very important, then great.  I'm glad to have started that debate up.  But I am not the story here.  And I don't want to be the story. Thanks.

What appearing on Adevarul can do for an otherwise moribund blog... 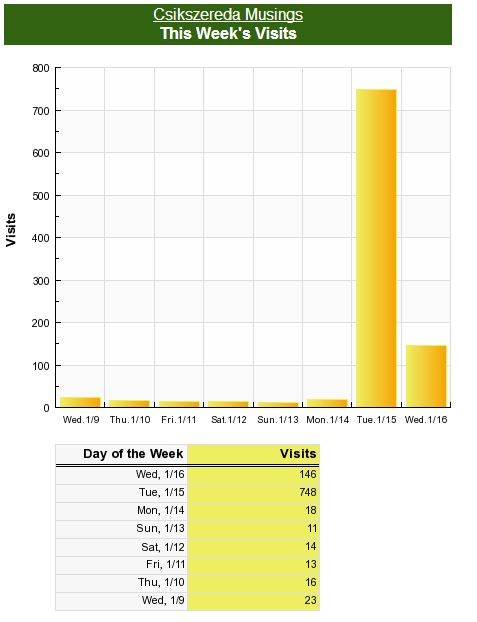 (Yesterday, for those who are not aware, a post I wrote last year about how the Romanian education system fails to really help kids who do not speak Romanian as a first language to speak Romanian well, was translated into Romanian and featured on the website of Adevarul newspaper here).  Made quite a difference to the number of visitors to this otherwise quiet little corner of the internet :-))
Posted by Andy at 9:26 am 11 comments: