Currently, I am on the mother of all trips. Was in Riga (that’s Latvia in case you don’t feel like looking it up) for the last two days, and left the hotel there at 6 this morning. Flew from there to Prague at 8.15 and changed planes to Bucharest, from where I am typing this (though I can’t get online despite the promise of free wi-fi in this cafe, so I’ve no idea when this will actually be posted). I now have to hang around here for a few hours before beginning what for ticketing purposes is the second trip, but what to my body is the same trip. Flight to Athens leaves at 7.15pm, and from there I go to Dubai. I’ll be in Dubai for 6 (probably) joy-filled hours in the wee hours, before boarding a plane to Brisbane, where I will end this approximately 42 hour trip on Friday morning. It is, quite possibly, the most ridiculous trip I’ve ever taken (and I’ve lived in the Pacific, where trips were routinely ludicrous with stops at remote atolls/chemical weapons dumps). I intended to do some kind of live blog of the trip but internet access appears to have stymied that slight “can I make this trip vaguely fun” attempt. So at least you, the long-suffering reader of this blog, are spared this less than thrilling experience.

I’m not quite sure when I will actually sleep on this trip, but we’ll cross that bridge when it becomes a major issue. I will be on business class from Athens onwards, so it might be easier than the worst case scenario. On Friday I actually have to go into work in Brisbane, which will be an interesting experience, as I imagine by then I will be a gibbering wreck. Still, it could be amusing, in its own way.

My carbon footprint from all this will be larger than one of those massive meteorite craters. Sorry, world.
Posted by Andy at 4:22 pm No comments:

1. Bucharest. Let's face it, it's a dump. OK, it has almost certainly the best nightlife in the country, and great cultural events, and reasonable shopping (by Romanian standards), and nice people. But it's a dog's breakfast of a city (and is, in fact, a city apparently ruled by swarms of feral dogs). Ceausescu absolutely devastated it, to the point where the only really interesting building is the hideous monstrosity of the Casa Poporului, Old Nic's most ludicrous folly. The traffic is diabolical and the roads are awful. I've had more than one person tell me, when they hear I live in Romania, "I hear Bucharest is a beautiful city". Where did they hear this? Or more importantly when? 1927? [To be fair, I've also heard people describe it as Europe's ugliest capital. Of the ones I've been to, I'd have to agree - though I haven't been to Tirana, Minsk, or Chisinau, and I suspect one of those might come close]. Basically, if you want to come for Romania for nightlife, then Bucharest is probably the place to go. Otherwise, avoid it.

2. Bran Castle. Bran castle is actually quite an attractive place, in a beautiful setting. But why people flock there in their thousands is beyond me. Romania has tons more and better things to offer than it, and Bran Castle as a tourist trap is mostly notable for being a triumph of marketing. Bear the following things in mind if you are thinking of going there: (a) There was no such person as Dracula; (b) the Romanian scenes in the book of that name take place nowhere near Bran; (c) Stoker based his character on a number of different historical characters, one of which may have been Vlad Ţepeş; (d) Vlad Ţepeş may, possibly, it is speculated, have spent one night at Bran Castle. If you want to visit a relatively attractive small castle in a nice mountain pass, then Bran might be for you (though Sinaia is much better, and easier to get to). If someone tells you that it's Dracula's castle, then snort derisively and tell them to spin that line with someone more gullible.

3. The Black Sea Coast. Awful. Rubbish-strewn, over-priced, ugly, over-developed eyesore. Just skip it. If you are here and need to go the beach, hop over to Bulgaria.

4. The spas. There are a fair few spa "resorts" in Romania, but all the ones I've been to are really really run down. They need a lot more work doing than a lick of paint. The abundance of mineral water here means that one day Romania will be the envy of Europe with its spas, but that day is a long way off. For now, they're really only of interest if you are one of the people who enjoys the whole masochistic "medicinal" spa treatment vibe thing.

5. Cluj. I want to like Cluj, I really do, but it's really never grabbed me. It's got one or two nice things to see, but as with many cities here, the whole Communist project was fairly destructive, and has left behind the sort of city centre in which you end up looking round thinking "I bet this used to be really nice". For a city with an attractive Hungarian architectural style, which is less of a mess, I'd definitely recommend Targu Mures over Cluj any day.
Posted by Andy at 10:38 am 20 comments: 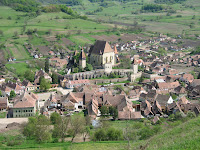 Next up: "Places that tourists often do go to in Romania but shouldn't bother with" (liable to be significantly more controversial)
Posted by Andy at 8:21 am 4 comments: