Anthem for my Romania

In my ideal world, the one in which multicultural traditions and roots are recognised and celebrated, rather than fought against and rejected, this would be the national anthem of Romania.

Romanian folk music collected and arranged by Bela Bartok, a Hungarian born in what is now part of Romania, and played here so amazingly by Taraf de Haidouks, a band of Rroma musicians from Romania.

(Posts on this blog are like buses, you wait months for one and then two come along at once)

This weekend (the weekend recently completed, if my use of "this" is confusing), Csikszereda suddenly became a cosmopolitan metropolis out of nowhere. From being a sleepy backwater in which nothing ever happens (two weeks ago there was a "come along and meet a bank robber" day at a local shop - that's how quiet we are*), we suddenly rocketed into a weekend starring as the cultural capital of the Balkans, Romania, Transylvania, Harghita County, the Csik Depression, before we have come back to our proper station as the land that time forgot.

How, you may be asking, did we make this dramatic shift? Well first of all the town became a satellite of the very successful TIFF film festival.  TIFF (Transylvania International Film Festival) runs every year in Cluj and has gained a really significant reputation.  This year they decided to have a part of it here called TIFFSzereda. This (as far as I can tell) has been a huge success, with the culture starved intelligentsia of the town flocking to see the various films on show. You can read all about it here. (or at least you can if you read Hungarian or Romanian).

Simultaneously was the 5th annual "Mini-jazz" festival.  I believe the "mini" refers to the festival rather than the jazz, which seemed to be perfectly normal sized jazz to me.  This too has grown into something fairly reasonable over those 5 years, and it's (weather permitting) a very enjoyable event, since it takes place in the courtyard of the castle, which is a not unpleasant place to sit around and listen to jazz and drink wine and/or beer. Somehow they even managed to tie these two events  together and have a film following on from the Saturday night concert in the same place.
http://www.jazzfestival.ro/ for details.

And that was it.  Well, that's a lot.  Really.  No actually there was another big event this weekend - the opening of a huge Dedeman superstore, but it wasn't terribly cultural. For anyone oustide Romania, Dedeman is a very big hardware shop, which as far as I can tell actually seems to be a Romanian owned business, which makes it more or less unique among the various urban-sprawl-based megastores that surround towns here these days.

[*To be fair the bank robber was local boy-made-bad, Ambrus Attila, star of the book "Ballad of the Whiskey Robber", so it wasn't entirely as weak as I'm painting it, but it's close]
Posted by Andy at 3:26 pm 3 comments: 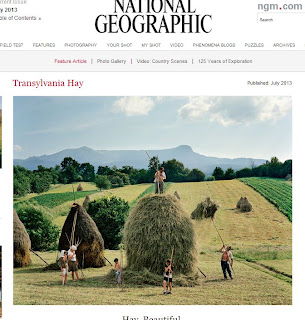 This article from National Geographic is excellent and tells a very good story of what life is like and how things are changing around here.

Csikborzsova is just up the road, and Gyimes is the valley I've talked about a few times on this blog, leading across the mountains into Moldova, where the Csango people live.

The article also talks a lot about the situations for farmers I mentioned here.

Anyway, read it and enjoy.  I love the paragraph about making hay in particular. http://ngm.nationalgeographic.com/2013/07/transylvania-hay/nicolson-text

By the way, it's probably good that National Geographic doesn't allow comments, given that I get enough shot from nationalist tossers just for using both the Romanian and Hungarian names for places - this article doesn't even bother with the Romanian names.
Posted by Andy at 11:29 am No comments: