From a very enjoyable holiday in some bits of what used to be Yugoslavia. I'll post stories from the road as I get round to writing them. We just missed out on some kind of apocalyptic storm on Saturday night which apparently shook the walls of houses, lit up the depression for four straight hours of middle-of-the-night lightning, and was described by a 75 year old neighbour as being unlike anything he'd ever seen or heard before. Some actually wondered if it was the end of the world.

On my way back from Barcelona before setting off I read this obituary of Patriarch Teoctist, head of the Romanian Orthodox Church who apparently commended Ceausescu for his "brilliant activity ... wise guidance ... daring thinking" when he sent troops to massacre demonstrators on the steps of Timisoara's Orthodox cathedral. Somehow, despite this, he managed to regain his position at the head of the church following Ceausescu's subsequent demise. Can't say that this wanker's death seems like a big loss to the world or to Romania.
Posted by Andy at 12:53 pm 1 comment:

Just back from a work trip to Barcelona, a town filled with signs reading the above, yet filled with tourists. We too, are just off for our long drive to the Croatian coast, and subsequently Slovenia. Should be a good two weeks, and I get to be a real dad (driving my family on holiday and telling the kids to be quiet and to stop kicking the back of my seat. I'm looking forward to it immensely (I really am). Anyway, this blog too is now tancat per vacances. 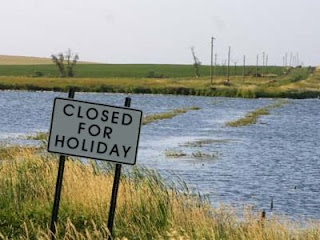