So, the election came and went while I was away last time, and basically the UDMR (or RMDSZ as they're known in Hungarian) cleaned up round these parts. I heard that all the MPP had to show for their efforts was one mayorship (mayoralty? mayordom?). I'm told they made a number of tactical errors - one of which was to tie themselves fairly closely to the Hungarian (ie from Hungary) Fidesz party. This included having a Fidesz speaker at all their rallies and so on, and clear links on all their literature. This might have seemed like a good idea at the time - many Erdelyi Hungarians have some sympathies towards Fidesz as they are seen as more in favour of the non-Hungary Hungarians than the Hungarian government, plus the Szekely, at least, are pretty conservative and therefore pre-disposed towards that end of the political spectrum - but people here also think (not without reason) that a party in Hungary has no real idea of what the issues and problems facing people in Transylvania/Romania are, and so this link backfired. In addition, an anonymous letter appeared in every mailbox in Csikszereda setting out the alleged sexual indiscretions of the mayor. This had the effect (as far as I can tell) of ensuring that people who would not normally have voted did so for the mayor as a protest at dirty tactics. (There are also strong rumours, which I have no evidence for, and which could be -and sound like- rubbish, that the leader of the MPP, Szász Jenő , was encouraged to set up the party by Basescu in a meeting a couple of years ago.) Szász , who I'm told was a terrible mayor of Udvarhely, bombed completely in his bid to be Hargita County Council President.

What this means for the next national elections, due up in the autumn, is unclear. Will MPP fold and throw in their lot with the UDMR? Or will they continue to go out and possibly split the vorte sufficiently to exclude any Hungarian party from parliament? At the moment things are unclear, but it seems that enought bad blood has built up to make it unlikely that the MPP will willingly subsume themselves into the UDMR.
Posted by Andy at 12:31 pm 1 comment:

Or more accurately, the grandfather of the apple. That's what Alma-ata (now mostly called Almaty) means. For a few moments after discovering this fact it had me musing on the Central Asian roots of the Magyars, since Alma is also the Hungarian word for apple, and ata is close enough to grandfather to be a feasible link. However, I suspect that the real and more prosaic reason is that it's a Turkish connection - Kazakh is a Turkic language and Hungarian has a fair few Turkish words in it from the Ottoman empire.

So, anyway, Almaty. I didn't get to see a huge amount of it to be honest, since we were holed up in the hotel for most of the time, working, eating and sleeping, but I did get to go to a pretty cool Mongolian-barbecue restaurant (and the sword wielding Mongolian in charge of the cooking was even happy to do a veggie run for myself and a Nepali colleague), and also to take a walk through the town to the main square in which there are some big statues and a place where you put your hand in order to make a wish. I can't really describe it any better than that, I'm afraid. It is what it is).

Finally though on my last day there, I got to have some free time, and spent it in the company of one of the participants at one of Almaty's most famous locations (or at least that's where we initially headed for), which is a big ice stadium above the city called Medeo. When i say ice stadium, I don't actually mean stadium made of ice, I mean stadium which is used in the winter for ice-related events. We actually didn't end up there though, because we got talked into a trip further up the mountain to a ski resort called Chimbulak, which was well worth it, and pretty high up. The evidence for this was the fact that it had been bloody roasting in the town (and even at Medeo which is high above the town), but up at Chimbulak a mere 20 minutes further on, it was decidedly nippy - and then when we took the ski lift up the mountain, not only did we start to find patches of snow, but we also needed the thick coats which we were advised to rent at the bottom. (I think we got to something like 3000 metres).

Anyway, I don't really have anything to say about Almaty (it was a bit like Bishkek, only bigger and with more expensive cars and shops - and if you want to know what I thought of Bishkek, you can just read here and here and here, which will take you back to the days when this blog was actually good. Or mediocre anyway.), so in the absence of any witty and enlightening words, here are a couple of pictures: 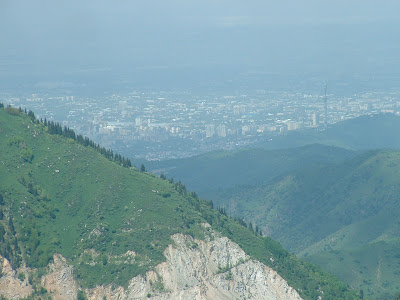 Almaty as viewed from Chimbulak 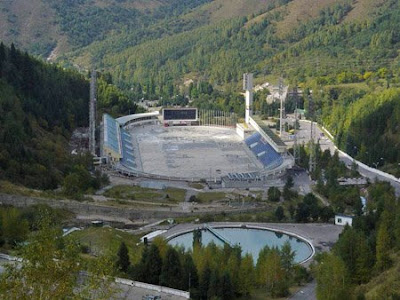 Medeo (Not actually taken by me) 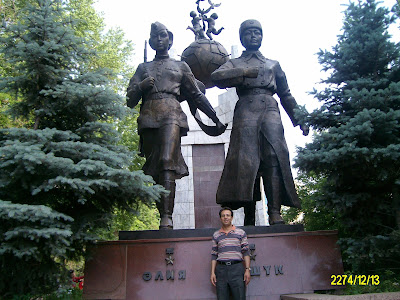 A statue of some Kazakhs. (Also not taken by me, but by an Iranian colleague - check out the Iranian datestamp on the picture)
Posted by Andy at 12:01 pm 2 comments:

The project I've been working on for the last year and a half is coming to an end, and so, I suspect, are my days of business class flying. I have three more legs to do to get back from Kathmandu to Bucharest, and that, I reckon, will be that.

So, what does business class offer that goes anyway to justifying the price? Well, the short answer to that is very little. This is what you get for your business class ticket:

That's really it. It's not a huge amount really. If you're flying a long distance and you can get a reasonable deal on one of the airlines mentioned below, then go for it. But otherwise, you're not missing a massive amount.

Airlines I've used recently that have really good business class stuff:
Pretty good, but not in the top league:
Rubbish:
Utter rubbish
Basically, what I'm saying is that you're not missing much, but it is a better travelling experience. For in-Europe flights it's a joke really. No wonder it's called business class - it just means the only way people will pay for it is if their company does for them.
Posted by Andy at 10:34 am 4 comments:

A couple of years ago, I took what I expected (nay hoped) would be the most ridiculously out of the way routing I'd ever taken - that was flying from Bucharest to Kiev via Amsterdam. I think though, I've just trumped that one (at least in terms of distance and time) by a huge amount.

I needed to fly from Almaty to Kathmandu, which on a map doesn't look that difficult. Nowhere near as close as Bucharest to Kiev, obviously, but it just looks like a 3 hour-ish flight across Western China/Tibet. You cannot, however, do it directly (which I guess is not a massive surprise, since there probably isn't a vast amount of regular traffic between the two countries). But when you look into it, you discover that it's pretty hard to do it with even one connection. There are two routes. The best one in terms of flight times, is via Delhi. This one however is problematic because the Almaty - Delhi flight arrives in the evening and the onward flight is not until the next morning. This would not be a major hassle were it not for the fact that to leave the airport (to go to a hotel, say) I would have needed a visa. And I didn't have that kind of time. So, instead I had to take the second option. Via Bangkok. To make matters worse, for reasons I'm not sure of, but which seemed to involve a need to circle the Himalayas and not cross the Gobi desert, the flight from Almaty to Bangkok starts off by going west and crosses Afghanistan, and Pakistan before flying east over India, Bangladesh and Burma. (Trust me this is not a terribly direct route). So it was a 7 hour flight. And, after a night in a very fancy hotel (Thailand allows me in with no visa, y'see) I am now in the airport waiting to fly on another 3.5 hours back to Kathmandu.

Still, it's not quite as bad as the fact that two of the participants of the workshop in Almaty who were from Nepal took a flight that routed them through Delhi and Frankfurt. So, I should be thankful for small mercies. Those two, by the way, left their home in the Kingdom of Nepal last Monday and will have arrived home yesterday in the Republic of Nepal. It promises to be an interesting time to be visiting Nepal all round, in fact. I never imagined I would spend time in a country run by Maoists (albeit democractically elected ones)

So, one night in Bangkok. I lived in Bangkok nearly 20 years ago and it was a spectacularly overcrowded, cloyingly polluted, gridlocked mess. It has got a lot better. (It may be one of the few cities in the world where the traffic situation has improved in that 20 year time period - though to be honest it couldn't have got much worse, without just becoming permanent gridlock). The airport is new, and very light and airy, a bunch of expressways have been built, meaning that the drive from the airport to the city centre took slightly less than 30 minutes - completely unimaginable when I was last here, and there is a overground railway system which has taken a lot of the pressure off the roads. I also noticed that on some downtown roads there is the big electronic board over the road which tells you which roads in the area are blocked/slow moving at that time. It's all very impressive. Even this morning (a Monday, after all) I was picked up at 7.30 and whisked to the airport in a similar time. I'm sure that there are still horrible bottlenecks and the extremely slow moving journeys of all cities, but the change that I have just experienced is pretty dramatic. Even the pollution seems tons better - 20 years ago I used to gag walking out the door into the traffic, but now I didn't even notice the fumes.

So, anyway, on to the world's newest Republic. Sawatdee Krap and Namaste.
Posted by Andy at 4:39 am 1 comment: