The following have recently (I mean in the last couple of days) appeared in the main square, finally. I wondered if anyone would ever make any kind of reference to the imminent accession, and it seems that now Christmas is out of the way, that people are starting to at least acknowledge that January 1st is just around the corner. 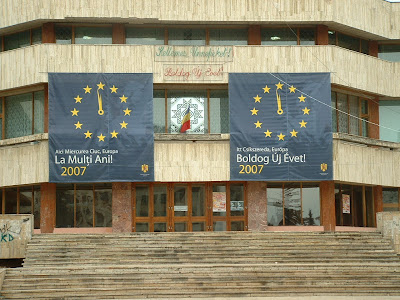 This one's outside the Culture House, nicely symmetrical in its bilingualism. 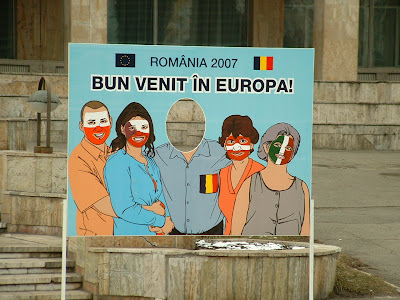 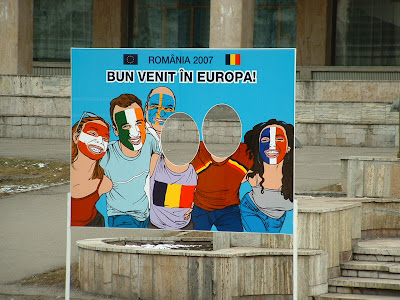 As you can see they show the happy European family welcoming Romania into their midst. At least I assume it's Romania. In fact the "blue" of the flag is so dark as to be effectively black, occasioning me to actually wonder for a while about the logic of giving people the opportunity to be Belgian. I mean they must be blue, but it's really really hard to tell.

The lampposts have all received the following decoration: 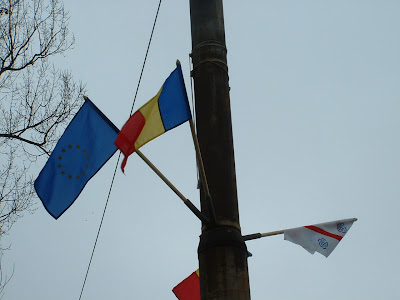 That white flag, in case you were wondering is the local one. I think it's the flag of Csikszereda, but it could conceivably be the flag of Haromszek, the old Hungarian county in which Csikszereda was. 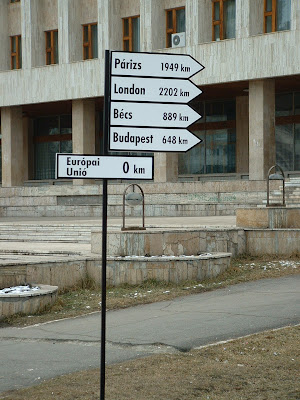 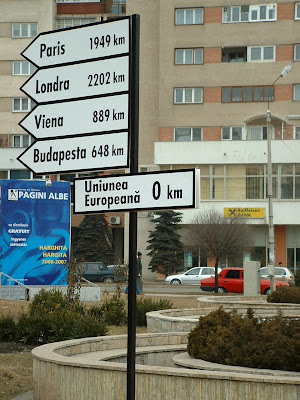 I find these quite embarrassing.

The ones with the faces are awesome. Pictures with you in the Romanian face and some kind of cheeky Victorian seaside postcard phrase underneath would be good.

I like your photos.I put some of them on my blog.

Those faces were horribly distorted, like killer clowns or some equally disturbing nightmare. Great shots!

Oh, and... I had to pat myself on the back for noticing London and Paris are incorrectly ordered. What a kitschy little sign; loved it!