Gorgeous. Crystal clear water, warm sunny days, no throngs of tourists, and more importantly no throngs of touristy shops full of things that Bogi would spend all day every day coveting. I'd recommend it to anyone - and the nice thing is that because of it's topography it's never likely to get any more crowded than it already is. The town's website.

The apartment we stayed in was pretty well situated, only about 100 steps from the beach (and by steps I mean here steps as in stairs - it is a hilly place), whereas most others we saw were well over 300 steps up and down. In fact I did one day count the steps and there were exactly 101, which meant that they constituted 101 Dalmatian Steps.

The beaches are superb - not sandy, but the water is just exactly right for swimming and especially for kids, shelving gradually, clean and warm and clear and salty enough to hold you up but not sting your eyes. Apparently they have won some prestigious Euro "blue flag" award which means nothing to me but they seem inordinately proud of it. I was also told that Brela beach once appeared in a list of the top ten beaches of the world in Forbes magazine (it must have been a slow news week in the world of rapacious capitalism), and was the only one in that list in Europe. I can't actually verify that fact but it does seem to be repeated at a number of Internet sites (which doesn't of course make it true). This is the most convincing page featuring that information. Though having looked at that list I would take some issue with it, given that I have visited about 5 of them, and they are in a very weird order. I'd like to know what the criteria were.

To finish, as is traditional when I go somewhere, name five famous Croatians, and while you think, so as not to have my answers give the game away, here are some pictures: 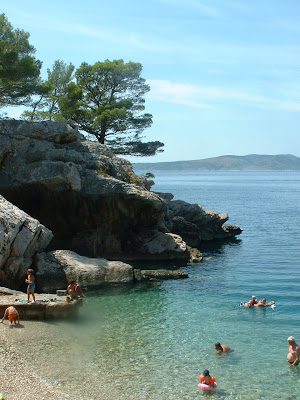 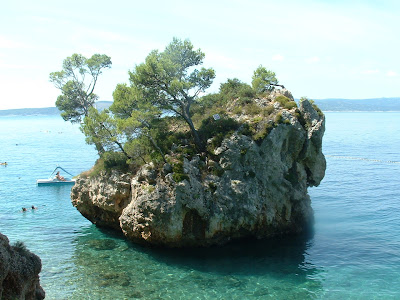 This rock is the symbol of Brela. if you look closely you can see that there is a little notice on it. The notice indicates that dogs are not allowed. It is not clear how a dog is actually supposed to get on to it in the first place. The only explanation is that the notice actually means "Do not throw your dogs on to this island" 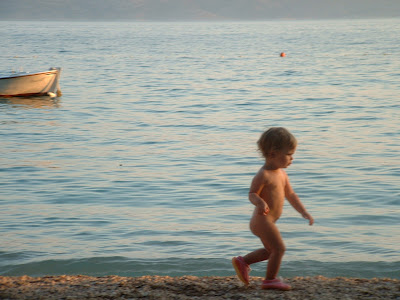 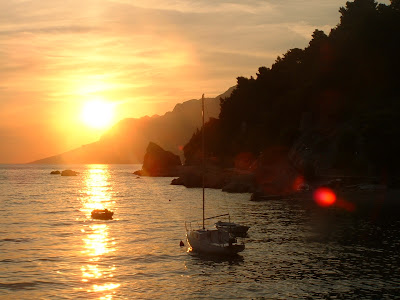 *It's obviously a bit risky mentioning Gotovina's name, since there are people out there lurking ready to misinterpret any use of his name in the category of "famous Croatians" as meaning that I hold him personally responsible for the deaths of 2 million Serbs. However, I do feel at liberty to express the opinion that Franjo Tudjman was an arsehole. And I wish he'd gone to the Hague.
Posted by Andy at 9:59 pm

Marco Polo might be in the top 5 Croatians. I bet nobody can name the 101 Dalmations though!

Two sportsmen and three political/military figures involved with wars. Hmmm, can we think of anybody else in the field of culture or the arts?

About Marco Polo, it's only the Croats that insist that he was Croatian, which I find hilarious since he was Venetian: the fact that he was (supposedly) born in what is today Croatia doesn't make him Croatian. Nobody would say that Greek philosophers born in what is present-day Turkey are Turkish (e.g. Thales or Heraclitus).

Ah, ok, I didn't know that; I'm not a Croatian, I'd just read that Marco Polo was. If residency was the criteria then Croatians could have electrics pioneer Nicola Tesla as well, who I think was ethnically a Serb. I get the same discussions where I live in Romania. Maybe we should celebrate individuals for the contributions they have made instead of putting them in these boxes!

Anonymous said...
This comment has been removed by a blog administrator.
5:23 am