A Sense of Humor

A few weeks ago during my lengthy blogless phase, Erika and I went to a meeting in (in in the east of ). I’d been to a few times before, and I like the place – it has a very interesting history, and seems to be in many ways the traditional centre of Romanian literature and “high culture” (along with another city the name of which escapes me which is actually now in ). On this trip, though, while we did get to sample the delicious Sapte Coline, we managed to get out of the city and take a trip to visit a couple of the famous painted monasteries of .

On the way from Iasi you actually get a further sense of how Romania plays host to many different ethnic groups - we drove through one town that has a significant Lipovan community (Russians who I’d thought only really live in the Danube Delta), another that contained more of the amazing houses that wealthy Rroma build, and a third which actually is a Polish town (dating back from when a group of them came to that town to mine salt some centuries back).

Eventually we reached , which is an area very reminiscent of Maramures, very beautiful houses, traditional lifestyle, gentle rolling hills etc. We headed for Gara Humorului, and thence to the Voroneţ , which is the location of one of the most beautiful of these monasteries.

Voroneţ is an amazing place. I’d seen pictures, but seeing it in the flesh (as it were) is pretty extraordinary. This is a monastery which was painted on the outside 400 years ago (so that the congregation who couldn’t fit in the church would get a kind of picture of what was going on inside. A kind of 17th century close circuit TV.) Nothing so amazing about that, perhaps, except that all these years later through 400 years of weather, the paintings are still there.

Latterly, after a huge and amazing Moldovan lunch, we also visited a similar monastery at Humor (hence the post title – I presume you didn’t really think I’d forgotten to put the “u” in did you?). That one was less impressive, but still fascinating.

Not much I can add, really, so I’ll do so through pictures: 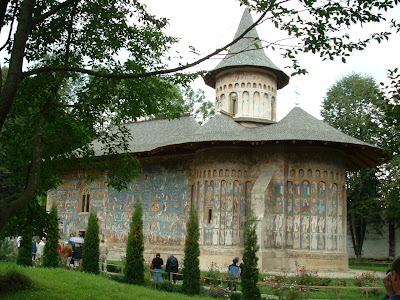 Voroneţ monastery in all its finery. It wasn't very sunny, I'm afraid, otherwise you might get a better impression of the vibrant colours 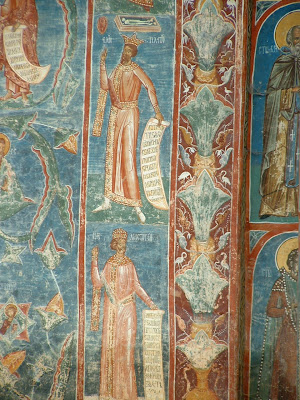 Plato and Aristotle, not characters often featured in biblical texts, but important because they were seen as vital pieces of the European (and hence Christian) tradition 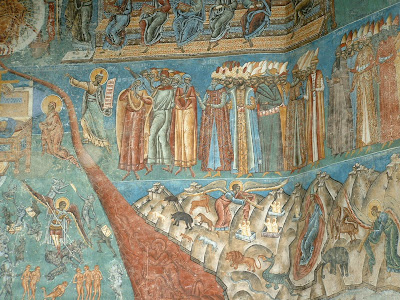 One whole wall of the church is given over to this epic mural showing this kind of red chasm running between the people who've made it into heaven on the left and those who haven't on the right. Here we see Moses attempting to persuade the Jews ands the Turks over that line. Not very PC I'm afraid 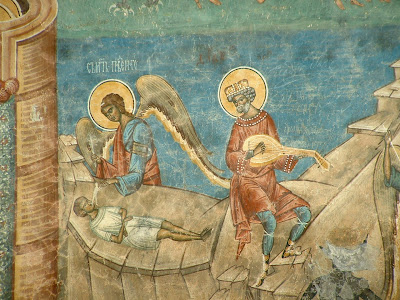 Not quite sure exactly what is going on here, but I think that little white bloke emerging from the child's mouth (you may need to click on the picture to be able to see him) is supposed to be his soul 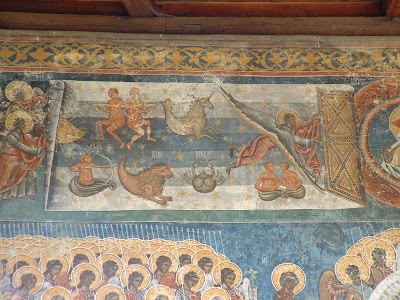 Here we see the signs of the zodiac. Apparently these monks/priests/whoever were not averse to throwing in any other superstition that came to mind. Or perhaps it was just a ruse to keep the punters coming. Yes, yes yes, we'll save your souls and tell you your horoscope. Two for the price of one. 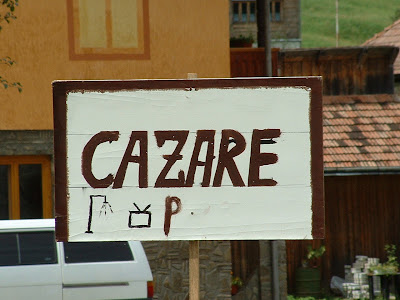 A more modern hand painted mural in the village of Voroneţ. Wonder if this one will last quite as long?

We spent a short but sweet few days in Bucovina and got some pretty nice pictures there too. We did not, unfortunately, get to see much else in the NE of Romania, so hopefully next time we'll get to Iasi.

I think Romania is one of the only countries we visited last year where the sign for Cazare is not translated into other European languages (Rooms/Zimmern/etc.). It doesn't seem very tourist-friendly.