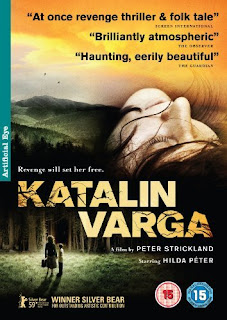 So a couple of weeks ago we watched Katalin Varga, a film made by a British director, set near here and filmed in Hungarian (mostly) and Romanian.
There are actually quite a few similarities between this film and "Along the Enchanted Way" (which I just reviewed here), though they may not be immediately obvious. Essentially both are clearly made (written/produced/directed etc) by Britons who obviously came to Transylvania and fell in love with the whole mediaeval vibe thing here - the scything, the horse carts, the natural beauty, the wildness, all that stuff. This is overt in Blacker's book, and perhaps less so in Strickland's film. However, so lacking in action and events is much of Katalin Varga, that you can only assume that it must have been a vehicle for Strickland to indulge his desire to show long slow shots of Transylvanian landscapes, and storks lazily flapping over remote villages, and men in fields cutting hay, and horsecart journeys across wide open fields with mountain backdrops.
In addition both feature very much a local cast of characters - "Enchanted Way" with your actual real people, though some are pseudonymised, and "Katalin Varga" with local crews and actors (and as I mentioned here, some of whom are actually based in Csikszereda).
There are two major differences though. Firstly that Katalin Varga is fiction (at least I bloody hope it is), and secondly that while life in these pastoral villages in "Enchanted Way" is idyllic and romantic and somehow beautiful, in "Katalin Varga" it's nasty, brutish, and short.
It's difficult to describe the plot of Katalin Varga at all without giving half the film away (primarily because very little actually happens in it), so I won't bother trying. It's mostly filmed in Covasna county (in the town of Kommando/Comandau in case you're interested), and I guess it is somewhat atmospheric. But because the film appears to be actually a showcase for the scenery rather than the scenery forming a backdrop for the film, and because I live here and see all this scenery every day, I have to say it left me feeling a little bit ...well, bored, frankly.
But, I guess this is my problem rather than the film's. I've just started reading another book "Blue River, Black Sea" by Andrew Eames, in which he says, while he's explaining what brought him to this part of the world:

The final catalyst for the book was a trip I made to Transylvania, where I stumbled into an almost medieval landscape that I never dreamed still existed in Europe, of scything farmers and their fruit-collecting children, of horses and carts, of wells in the villages, wolves in the woods and bears in the hills. The storybook detail was captivating. The storks on the chimney stacks, clapping their beaks when their youngsters stood up. The chicks in homemade chicken runs on the roadside verges. the little smoking huts in every yard, breadmaking ovens for summer use. And the daily cow parade, when all the villagers' cattle brought themselves back from the fields punctually at milking time and wandered down the main street until the reached their owners' houses, where the gates would be standing open to welcome them home. Transylvania seemed a mythical place, one where you literally didn't count your chickens until they hatched, and one where you made sure you made hay while the sun shone

And he's right in that very evocative and very real description. That is, more or less, exactly how it is. And it is beautiful. But somehow living here, I have sort of forgotten. I no longer notice any of these things, so utterly normal are they. And that does make me slightly sad I think, that I live in this place which to an outsider seems almost impossibly exotic (in a very retro sense of exotic), but which has ceased to make me swoon on a daily basis as it obviously did Eames, and Blacker, and Strickland.
I haven't really reviewed "Katalin Varga" have I? To sum up, beautiful and evocative and atmospheric if you don't live in Transylvania, with a fairly slight (and very dark) plot.
[By the way, Katalin Varga, is actually the name of a famous Transylvanian woman who led a miners' movement. I presume the choice of her name for the lead character of this film is significant in some way, but I'm not sure what the significance is]
Posted by Andy at 2:28 pm

Hi,
This is a movie I want to see...
Thanks for the review,
Camy

P.S. It's normal you don't see the beauty of those places anymore...the novelty is out. But I do hope you enjoy your living there!

I saw Katalin Varga and can't agree with your description of it as an uneventful film. I thought it was a taut, scary story of a woman in flight -- a woman who is both predator and prey. Parts of the movie felt like a hallucination, and the end is very violent and bleak ind indeed. Readers, be warned. This film does have some long shots, but it is no snoozer.

When Katalin Varga was premiering in Budapest I read somewhere that Peter Strickland had originally planned to film it in Albania.

This was on at the Cluj/Kolozsvar film festival and I totally failed to see it, but it does sound worth a look. I do hope that Mr Strichland's film included shots of the Kommando/Comandau mocăniţa.

I had the extraordinary pleasure of watching this movie back under the 2009 Copenhagen Film Festival where it won the main prize. I have to concur with Caroline, what's amazing about this film is how it is able to hold the suspense with such limited outward action. It is a terrifying story set in gorgeous landscape and not all of it is Covasna -- the introductory scene is in the castle ruin in Stolzenburg (Slimnic), my daughter's favourite castle in Transylvania.

I will never forget that particular evening in Copenhagen. It was a saturday night, last night of the festival, and Peter Strickland showed up for the screening; it was the last film I ever watched in that fantastic little arts cinema Posthusteatret (they had a wonderfully cosy bar, fantastic films and the worst possible cinema seats ever seen).

Peter Strickland had to dash off after the screening to attend the closing event of the festival. A few hours later it was announced that he had won the grand prize ... 50,000 EUR might just about have recovered his outlays for the film.

If he ever does another movie, I will surely watch it.